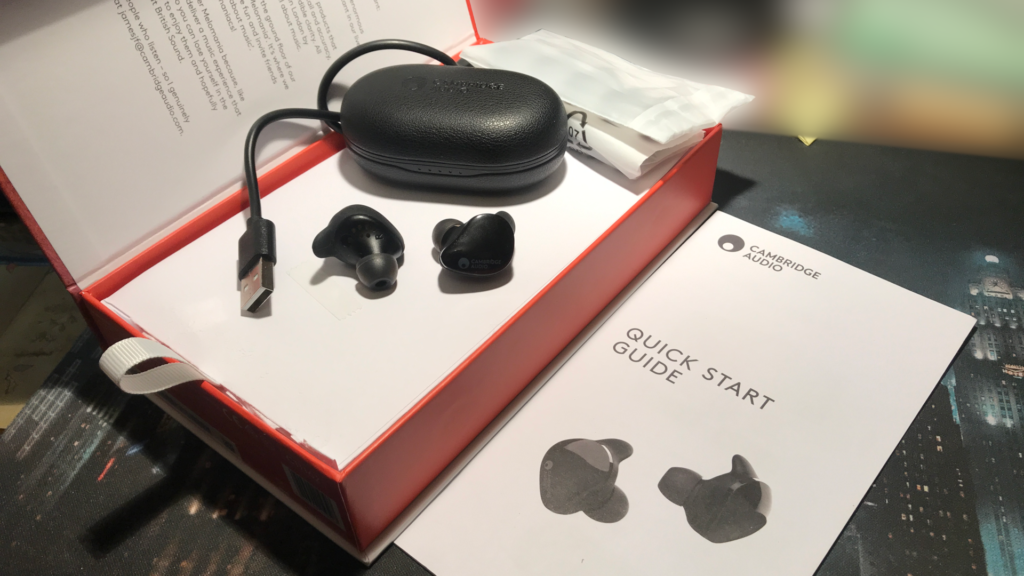 There are so many in-ear wireless headphones on the market that it’s getting harder and harder to choose. Melomania Touch from Cambridge Audio is another product for music lovers, which, according to the manufacturer, has a great sound and lasts up to 9 hours of music playback. How it works in practice? I invite you to review.

Cambridge Audio is a company that has been manufacturing audio equipment since 1968. The company offers two models of in-ear wireless headphones: Melomania 1 (including their newer March 2021 version: 1+) and the Melomania Touch discussed in this review, which were released in January 2021.

What’s in the box?

In the box, in addition to the headphones themselves, there are also:

How the headphones present themselves?

Melomania Touch are available in black and white. Pictures do not show it, but in reality, both the ear buds and the case look really nice in my opinion. They look especially good in comparison to the mentioned Melomania 1+ headphones, which resemble…earplugs. Unfortunately, the glossy surface covering the top of the Melomania Touch gets very ‘fingered’, although this is rather imperceptible in motion.

Are the Melomania Touch comfortable?

However, you can see that the appearance of the Melomania Touch has been subordinated to comfort. The shape and the pips were designed in such a way that on one hand the headphones do not have to be pressed into the ears, and on the other hand they do not fall out of them e.g. while running or moving your head faster.

The headphones are IPX4 certified, which means that although splashes of water in the rain should not be terrible for them, you need to be careful not to „bathe” them in water. In this regard, some competitors’ devices can boast better durability.

On this occasion, it should also be noted that, unlike many competing headphones, the Touch does not come with active noise cancellation. However, they save a lot of power and simply play longer.

How long they play?

As part of my testing, I listened to music and movies at the settings: „High Performance”, at medium volume, with the AAC codec enabled by default (in addition to it, the headphones also support the aptX codec). Each time I charged the headphones to full and tried to make them play a musical marathon until they discharged. On average they lasted about 6 hours 30 minutes in this way, so the promised „up to 7 hours”. However, sometimes the left or right handset discharged slightly faster than the other.

In power-saving mode „Low Power” headphones lasted about 8 hours. In each case, the standard voice message informed about low battery, and then turned off automatically. Example measurements of the length of playing, in two available modes, I attach in the picture below.

The case extends the playing time by 30 hours

The case for the Melomania Touch serves not only to store the headphones, but also to charge them. It is solid and small enough to fit in any pocket. The charge status of the case is displayed on an easy-to-read, five-point scale from LED lights. Charging the case itself, via the USB Type C connector on its back, takes about 2 hours. Unfortunately the included cable is very short (30 cm) so that the container during charging must be close to a power source.

When you put the headphones in the case, the red flashing LEDs on each „fleeces&#8221 will inform you that they are charging;. Charging is made somewhat miserable by the fact that you have to open the case and check that the LEDs have gone off, which indicates that the battery is full. Not available here e.g. Sound signal or more convenient to signal the end of charging. Charging the headphones lasted on average about 1 hour 20 minutes. From a full case I charged them 4.5 times, which translated into a total of about 36 hours of continuous music listening (full headphones + full case).

When it comes to pairing with devices via Bluetooth, the headphones are based on Qualcomm’s technology, TrueWireless Stereo Plus. This allows them to connect to the same source separately. This means that e.g. Right or left handset only, but by default – both.

Most of the time when the headphones were paired with a smartphone, they paired flawlessly. Both for iPhone and Android smartphones. However, there were occasional connection losses (e.g. (after connecting headphones to computer Bluetooth adapter). Several times during the two weeks it was necessary to „reset” headphones according to the simple instructions included by the manufacturer.

Other times there was a problem with connecting headphones with dedicated Melomania application, even though they were paired with a phone via Bluetooth. Of course, it would be best if similar pairing problems did not occur at all, but it seems to be a fairly common flaw in many of the wireless headphones on the market. More disturbing were situations when headphones signaled for example. turn on (with the message „Power on”) and in the meantime were still off. It is possible that this will be fixed with software updates, and it also does not suffer very much in everyday use.

Melomania Touch support Bluetooth 5 standard.0, therefore, together with compatible equipment, according to the manufacturer’s declaration, should maintain the connection with the sound source up to 9 meters. I checked this in an open space and in a straight line the headphones lasted up to a distance of 12 meters. They were much worse in rooms where one thick wall caused some interference. On the other hand, without any problems was held eg. putting the paired phone in my pocket, from which the music still flowed unobstructed into the headphones.

Melomania Touch are equipped with two touch panels, which allow you to control music playback. You can familiarize yourself with their functionality in less than a minute thanks to the accessible instructions in the mobile app. The basics of this control are as follows:

Everything is very intuitive and usually precise; with few exceptions, when we miss e.g. into the touch surface. However, it is large enough that it happens rarely. More annoying may be accidental „touching”the panels, resulting in stopping the music, which, however, happened to me occasionally.

The sound quality of the headphones, to my layman’s ear, seems really excellent. The bass is audible and pleasant, and the music is clear – it just flows.

The headphones also have a built-in microphone. Unfortunately, it does not provide a completely clear sound, but one that resembles a slightly humming telephone conversation. The microphone also picks up ambient noise, but the speaker can still be heard. So the microphone seems only „ok”, no revelations.

The creators of Melomania Touch have prepared a mobile application dedicated to the headphones, available on iOS and Android. It is intuitive and clear, and above all – it can be really helpful. Firstly it allows you to view the exact charge level of the headphones. Secondly, the application includes an equalizer, which allows you to play with increasing and decreasing the bass or treble in the headphones. Bass amplification is actually pleasantly noticeable, because it adds a layer of music that is normally simply inaudible.

Thanks to the application you can also turn on „Transparency Mode” (you can also start it with a simple gesture of tapping the earpiece 3 times). This mode causes the headphones to start transmitting ambient sounds through the microphone. Although they do indeed become more audible, it is still unlikely to talk to another person in this way, without turning down the music. It is worth noting that this function began to work a little better after updating the software headphones.

What is great is the ability to disable some gesture controls in the application that we will not use, such as. voice assistant. In the app we also get a practical option to indicate the last place where the headphones were connected to the phone, in case they fall out of our pocket or ears.

Price and support from the manufacturer

Melomania Touch is a very well thought-out product in many respects. Headphones fit perfectly in the ear, their battery lasts up to 8 hours of continuous play and the sound quality is more than satisfactory. Track scrolling and volume boosting with the touchpads generally works well, and the app hides a lot of practical and intuitive functionality.

However, it is not without a few compromises. The hardware is devoid of active noise cancellation, equipped with an average microphone. It happens to have minor problems with pairing itself. It also does not support e.g. multipairing (connection with two or more Bluetooth devices simultaneously). The Melomania Touch are also not very water resistant and the included charging cable is too short.

It is worth noting that the manufacturer of the Melomania Touch, Cambridge Audio, seems to be very responsive to customer feedback. Practically immediately after the launch of the headphones there was also available a software update of the headphones. So we can suspect that the price of the device also includes active manufacturer support; also in case of technical problems (for those interested: although the headphones were designed in the UK, their production takes place in China).

The price of the Melomania Touch in the official Cambridge Audio store is The price is only PLN 675 (139.95 euro) with free shipping to Poland. To me the headphones arrived relatively quickly, in less than 3 working days. To sum up – it is worth to consider their choice on the way to purchase wireless in-ear headphones.